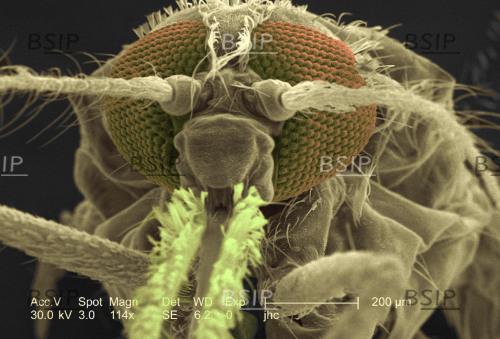 Légende : Anopheles gambiae (vue antérieure, MEB colorisé, x 114, le trait représente 200 microns). Sont bien visibles : les yeux à facettes (constitués des ommatidies), les antennes, la trompe (proboscis) et les palpes maxillaires (en vert). Anopheles gambiae est un des vecteurs du paludisme et de l'éléphantiasis. Anopheles gambiae > Anophèle > Moustique > Culicidé > Diptère > Insecte > Arthropode. At a magnification of 114x, this scanning electron micrograph (SEM) revealed some of the morphologic features displayed on the exoskeletal surface of an Anopheles gambiae mosquito's anterior head region. Included in this field of view were the two bilaterally located antennae, the proboscis, two maxillary palps, and the clypeus, to which the aforementioned structures are attached. Also note the two bilateral multifaceted compound eyes. The head is specialized for acquiring sensory information, and for feeding. Appearing as ruffled, "feathery" structures, the two "maxillary palps", which in the Anopheles mosquitos, are as long as the proboscis, act as sensorial organs providing the insect with information on environmental changes in temperature and chemistry, as do the two antennae medial to the mosquito's eyes. The compond eyes, made up of a multitude of repeating subunits known as "ommatidia", provide the organism with a unified multifaceted mosaic appearance of its surroundings. Also seen in the field of view, was the "V"-shaped "labrum", as it lead into the mouth of the mosquito. Contained in a sheath, the labrum is the larger of two sharp structures known as "stylets", which pierce the skin of its hosts, and together are known as the "fascicle". Together the sheath and stylets are known as the proboscis.