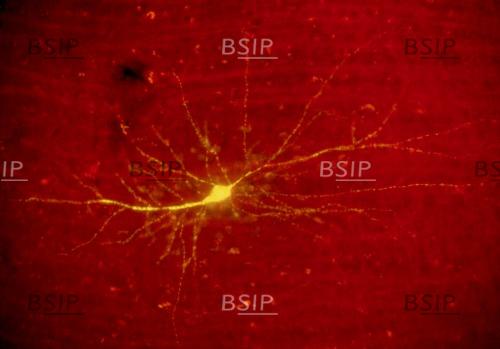 Légende : Fluorescence light micrograph of a stellate neuron the human cortex. This stellate neuron has been stained with the fluorescent dye Lucifer Yellow. The cerebral cortex is a layer of nervous tissue that is outermost to the cerebrum and cerebellum of the mammalian brain. It is called the grey matter of the brain due to nerve fibres that lack insulation (myelin sheath). It consists of up to six horizontal layers. The Cortex Layer 4, the Internal Granular Layer, contains different types of stellate cells. The stellate neuron in this micrograph is from the V1 region in the visual cortex. These stellate neurons (often called cortical spiny stellate cells) receive excitatory synaptic fibres from the thalamus and process feed forward excitation to the visual cortex pyramidal cells. The cerebral cortex plays a key role in memory, attention, perceptual awareness, thought, language, vision and consciousness. Magnification: x40 when shortest axis printed at 25